Brachycpehalics – Is there anything new?

Brachycephalic Obstructive Airway Syndrome (BOAS) is the term given to breed-related respiratory disease that is caused by “obstructive” soft tissues. The most commonly affected breeds include the English Bulldog, French Bulldog, Pug and Boston Terrier although other breeds eg Cavalier King Charles Spaniel, Shi-Tzu etc can occasionally be affected.

Affected dogs are typically noisy breathers and struggle to keep up with other, non-affected dogs. Sadly many owners do not realize that their dogs have BOAS as many of the classical symptoms can be regarded as “normal” for the breed. More advanced symptoms include poor exercise ability, heat intolerance and collapse.

Affected dogs are born with the above primary factors.  These cause a degree of obstruction to the normal breathing pattern. Dogs then have to breathe harder and faster to force air past these obstructive tissues and this results in large forces being generated. These forces sadly result in worsening of the airway obstruction. Much the same as how the sides of a straw collapse when you suck hard, the walls of the voicebox (larynx) get drawn in and collapse.

The soft palate gets sucked into the airway and other structures eg the tonsils become inflamed, enlarge and can also contribute to the obstruction.  Collapse of the larynx can be associated with a poor prognosis as this is not a reversible condition although some dogs (especially pugs) seem to cope relatively well with this condition.

Different dogs seem to develop laryngeal collapse at different ages – many before they are 12 months old. The rate of collapse is likely linked to the (lack of) structural rigidity of the larynx itself and the airway forces applied to it during normal breathing.

Many owners will spot what seems to be a sudden deterioration in their dog’s breathing and this often coincides with the onset of laryngeal collapse. Obstruction of the airway will cause a characteristic high pitched /whistling breathing sound (stridor), especially during exercise, and any owners who hear this should seek veterinary assessment.

How is it treated?

Routine BOAS treatment involves surgical assessment and removal of any soft tissues that seem to be causing obstruction. This typically involves either shortening or thinning of the soft palate, removal of the tonsils and widening of the nostrils. We aim to assess dogs at a relatively young age so that we can try to avoid or at least postpone the onset of laryngeal collapse.

We would always advise that this assessment and surgery is carried out by somebody who has had significant training in ENT surgery such as an RCVS recognised specialist in surgery so that the risk of perioperative complications is minimised whilst the dog has the best chance of getting the full benefit from surgical intervention. The precise combination of procedures used and the role of medical managements is often tailored to the individual dog and this will be discussed with you during a consultation.

Does the treatment work?

Yes! The vast majority of dogs respond very well to the “traditional surgery”. The “noisy breathing” should be reduced but, most importantly, the ability of the dog to exercise should be improved and the dog’s overall quality of life increased. There are some dogs, however, that will not seem to significantly improve following surgery. These dogs will typically have significant secondary disease (eg laryngeal collapse) which will limit any improvement seen.

Further surgery is sometimes advised for these cases.  Other cases, however, will have significant obstruction caused by eg overcrowding of the nasal chambers and, as this is not addressed by conventional surgery, their improvement following surgery will be incomplete.

Is there anything new?

Yes! There have been recent advances in both the assessment and treatment of BOAS cases…

Although BOAS grading systems have been available and in use for some time, a new grading system has recently been launched. Cambridge University have been working closely with the Kennel Club to try to develop way of determining which dogs are likely to benefit from surgery/surgical assessment. Dogs have always been assessed based on a combination of thorough history taking, clinical examination and ultimately by direct assessment of the airways whilst the dog is under anaesthetic.

Recent work has highlighted the fact that some dogs will appear relatively quiet when breathing at rest but that have significant exercise intolerance (ie they tire very easily) and these dogs may have previously been given the benefit of the doubt and not admitted for further investigation. Cambridge have therefore launched a scheme – the Functional Respiratory Grading System (FRGS).

Each dog is assigned a score (1-3) based on the amount/type of respiratory noise that it makes before and after an “exercise” test. This score can then be used to guide recommendations for future breeding and also to identify individuals which would benefit from surgical intervention.

The aim of this scoring system is to be as objective and consistent as possible. Although useful for detecting affected BOAS dogs at an early stage, please don’t be concerned as we will not ask any owner to run around the carpark if their dog is already showing signs of breathing difficulty!

We have realised that some dogs will have more digestive disorders (eg regurgitation/vomiting) than others. These are often due to problems with the foodpipe (oesophagus) and can even involve the stomach sliding into the chest (Hiatal Hernia). These diseases can be driven by the same respiratory pressures/forces that cause laryngeal collapse. In turn, however, persistent reflux can also cause inflammation of the larynx/pharyngeal tissues and this can then worsen respiratory signs.

These two systems thus create a vicious cycle. Treatment therefore has to be focused on both these systems – antacids are often used before and after surgery to try to decrease/control any regurgitation and studies have shown that dogs have a better response to airway surgery when any digestive disorders are treated at the same time.

Dogs who have over-crowding of their nasal chambers often do not benefit from nostril widening. This is because airflow is still compromised and dogs cannot breathe effectively through their nose. Nasal breathing also has an important role in temperature regulation. Recent work has shown that some dogs will benefit from having their nasal chambers opened up using a laser to burn out obstructive tissues. Research has shown that dogs can do well following this additional procedure. Thankfully, only a minority of cases require this intervention which is not yet widely available in the UK.

Referral surgeons are available to any member of the public but a “referral” is required from your usual vets before we can arrange to see you. This may be a simple phonecall or an email but this ensures that we have all the relevant history and information so that we can give you the best advice. This is a very similar process to your GP referring to you to a consultant for treatment.

At Eastcott, our referral surgeons have all undergone surgical training to specialist level (ie to consultant level). This is a rigorous period of 3-5 years of closely supervised training followed by some fairly horrible exams. Only surgeons who go through this procedure are allowed to call themselves “specialists”.  Our soft tissue department has successfully operated on hundreds of BOAS cases and works closely with our referral anaesthesia and critical care departments so that, not only the surgery, but the anaesthesia and aftercare are performed to the highest standards possible. This multi-disciplinary approach enables us to give “gold standard” care to any cases that we see. 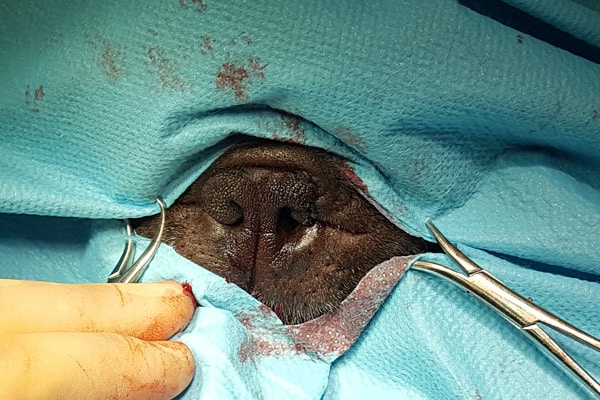