Specialists from two Linnaeus referral centres joined forces to fix the badly-broken jaw of an eight-week-old puppy, who was injured in a squabble over a pet’s toy in the garden.

The young cocker spaniel pup, called Mole, was bitten by 10-year-old retriever Tarka in the altercation, with distraught owner Elizabeth Stacey immediately rushing her injured pet to the vets.

Mole’s jaw was so badly damaged that he was referred to Cave Veterinary Specialists in Somerset, which is part of Linnaeus, to have his injuries fully assessed.

“He was in a lot of pain, was unable to close his mouth and he had mandibular drift, with his fractured jaw slewed to the right.

“He was admitted and anaesthetised for a CT scan of his skull and thorax to obtain high quality images of his fractures.

“A carefully constructed tape muzzle was then applied to support his jaw and allow him to close his mouth for greater comfort, and to ensure his teeth were meeting correctly.

“We also placed a special feeding tube into his neck so he could be fed without needing to use his mouth.

“Whilst a tape muzzle is an acceptable way to treat this sort of fracture, I felt there was a better course of treatment for Mole that would deliver a more predictable outcome.

“That was for him to have maxillary-mandibular composite bonding, a temporary bridging fixation between his upper and lower teeth to hold his mandibles and maxilla in place.”

Jess contacted colleagues at Eastcott to ask for help and they offered to see Mole the following day. 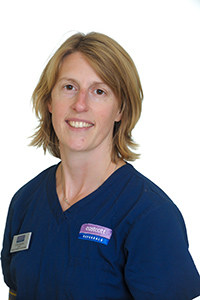 Alix Freeman, dentistry resident at Eastcott, said: “The injuries to Mole’s lower jaw were very bad and because he was so young and his bones were still growing, we had to carefully consider the various repair options available for stabilisation of his jaw.

“We opted for maxillomandibular fixation which involves bonding the upper and lower canine teeth together with composite, which is the same sort of very strong material used in human tooth fillings.

“Incredibly, though, he was lapping a liquid food diet using his tongue within hours of waking up from the anaesthetic, which was amazing because it can take patients several weeks to learn this new way of eating.”

Mole continued to defy the odds and delight the vets with his remarkable recovery from such a serious injury.

Alix added: “At his follow-up appointment a few weeks later, we could see on the CT scan that Mole had healed very quickly and his jaw alignment was excellent. His long term prognosis is very good and we were able to completely remove the bonding material after nine weeks.

“Mole was a great patient, such a happy little puppy throughout and seemed totally undeterred by all the treatment he has had so far.”

Relieved owner Elizabeth, from Colaton Raleigh, near Sidmouth, said: “It was a very traumatic incident. Unbeknown to me Tarka, had taken Mole’s chewy toy bone into the garden and was lying on the lawn with it in his mouth.

“Mole darted up to him and tried to get it back. In the tussle which followed, Tarka closed his jaw around Mole’s little mouth and broke the puppy’s jaw.

“Mole was squealing and crying and was clearly badly hurt but he’s now back to his normal energetic, excitable self again for which I’m extremely grateful.

“I cannot fault Cave or Eastcott for the care and treatment they gave him. They were both fantastic.”