Treating polytrauma in a cat during lockdown

One March night, Max a young adventurous cat sadly did not return home

Max was found hobbling and non-weight bearing on his right thoracic limb by a good-willed lady and taken in the middle of the night to a local out of hours provider. Thankfully Max had been microchipped as a kitten and so quickly his owner was identified and contacted. There was clearly a large malalignment of his proximal humerus – with an unusual lateral displacement so a humeral fracture was suspected. Max was stabilised and given pain relief prior to referral to Eastcott Referrals.

When he arrived at Eastcott Referrals his right thoracic limb lameness and humeral fracture were visually evident from a distance. Despite Max walking remarkably well on his remaining three limbs, full orthopaedic assessment showed pain and dorsal instability of the left tarsus too. Radiographs were taken for full assessment and showed a proximal humeral physeal fracture.

A proximal dorsal intertarsal instability at the talocentral (or proximal intertarsal) joint was also identified, an interesting injury and one uncommon to see without other concurrent tarsal injuries. The ruptured dorsal ligaments are not in tension during weight bearing, which explains why Max was able to ambulate so well in spite of a serious and significant injury. This highlights the importance a full examination in all patients, especially those who have been unfortunate enough to sustain trauma.

Max underwent surgery to repair his physeal fracture with pins and a tension band. A dorsal mini plate was placed across the dorsal tarsus with two screws in the talus, one in the central tarsal bone, one in the third tarsal bone and one in the very proximal second metatarsal bone.

Covid-19 has sadly limited follow up to videos consultations and pictures but he has thankfully returned home and we’re reliably told he is chasing birds without lameness once more! 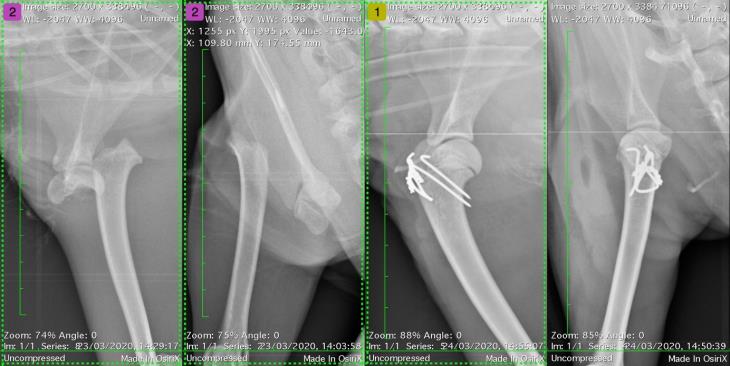