An 18-month old Bulldog presented with a left pelvic limb lameness that was unresponsive to medical management and rest.

The two conditions have been reported to commonly occur concurrently. One hypothesis is that a malalignment of the quadriceps mechanisms with subsequent patellar luxation leads to increased stress on the cranial cruciate ligament which promotes its degeneration and rupture. Rupture of the cranial cruciate ligament can also reduce the rotational stability of the stifle and the retropatellar force that pushes the patella into the trochlear groove, both of which promote luxation of the patella.

Addressing the joint instability that follows a cranial cruciate ligament rupture is routinely performed by Tibial Plateau Levelling Osteotomy (TPLO) whereas correction of patellar luxation is performed by realigning the quadriceps mechanism which usually involves transposing the tibial tuberosity. Traditionally, the two procedures are rarely carried out simultaneously because of the risks associated with two osteotomies potentially leading to instability of the small fragments.

To address the two conditions during a single anaesthetic event, a modified TPLO was carried out. This involves translating the entire distal fragment of the tibia laterally relative to the proximal fragment. This realigns the quadriceps mechanism without the need for a further osteotomy and the risks associated with it.

A trochlear block recession was also performed to further improve patella tracking within the femoral trochlea and minimise the risk of re-luxation. 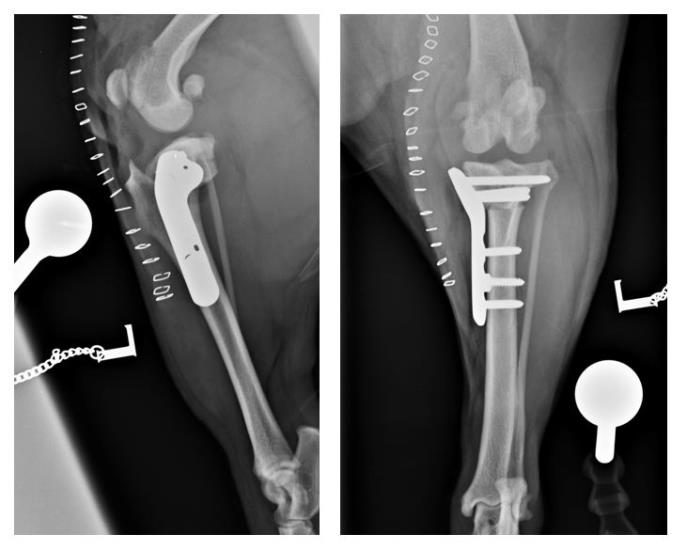 The modified TPLO procedure was carried out using an elemental-silver-based-plasma-coated plate that continuously diffuses silver ions within the surgical site for up to three months. This provides a broad spectrum antimicrobial action that negates the necessity to use antibiotic medications once the patient leaves the hospital.
The dog recovered well from the procedure and is currently doing well.
This procedure was performed by our Orthopaedic Surgeon Fabio Frazzica and our team of Orthopaedic Nurses and Veterinary interns.