Tilly was seen by our Soft Tissue Surgery department as an emergency during the COVID-19 lockdown in May. 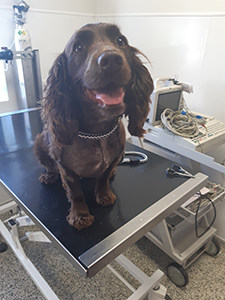 Working cockers are often referred to as “pocket rockets” and Tilly had been running through the woods but had somehow injured herself by running onto something sharp.

Tilly was initially very subdued and was taken to her vets, who diagnosed her with a pneumothorax secondary to a puncture wound at the thoracic inlet (at the base of her neck) prompting onward referral to the surgery team at Eastcott Referrals.

Once at Eastcott, chest drains were placed to evacuate the air from Tilly’s chest and she was stabilised with intravenous fluids and supplemental oxygen.

The puncture wound was small but clearly communicated with the inside of her chest and air could be seen being pumped out of this wound as the lungs expanded.

Once stable, Tilly was taken to surgery where her chest was opened and explored via a trans-sternal approach. The puncture wound and tract was followed through into the chest where it contacted the tip of the right cranial lung lobe. 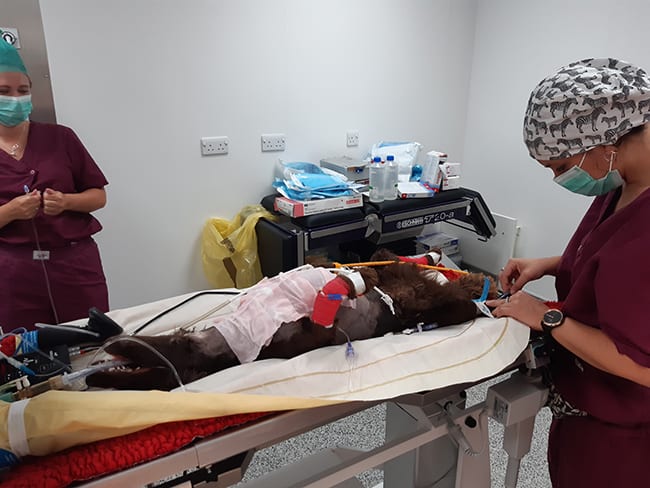 All damaged tissue was removed, the whole area thoroughly flushed to prevent any infection and Tilly’s wounds were then closed routinely. Tilly went on to heal smoothly and uneventfully, her chest drains were removed the day after surgery and she was discharged the following day with a course of antibiotics and postoperative analgesia.

Tilly needed a total of six weeks’ exercise restriction to allow her sternum to fully heal but she has now fully recovered and is raring to get back to running through those woods again!

A trans-sternal thoracotomy (sternotomy) is one of the most invasive surgeries we perform in veterinary surgery but dogs constantly surprise us by how quickly they seem to recover from this approach.

Aside from careful surgical technique, one of the key factors contributing to this rapid recovery is appropriate pain management. 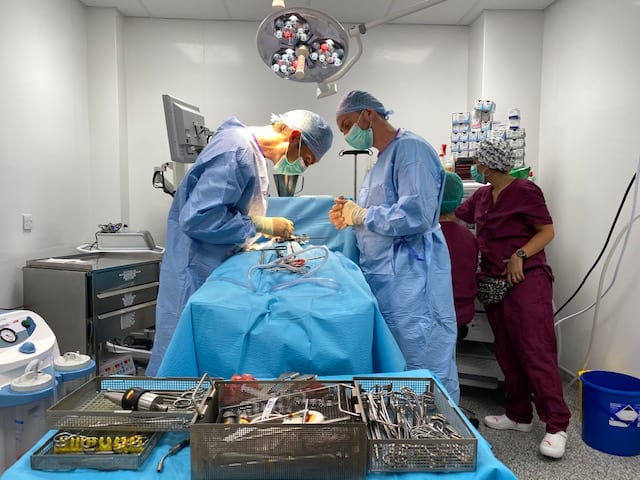 Tilly would not have had such a smooth journey if it was not for our anaesthesia department. Our anaesthetists were there providing oxygen as Tilly was admitted, were there to give Tilly a preoperative epidural and then to run the ventilator and intraoperative constant rate infusions during the procedure itself.

The anaesthetists also helped recover Tilly until she was passed through to our ICU team for recovery and then supervised her postoperative analgesia regime.  It was lovely to see Tilly so waggy-tailed and happy the day after surgery. Tilly’s pain levels were regularly assessed but she was deemed comfortable at all stages of her recovery and was the model patient. We wish her all the best for the future (but hope she takes a bit more care through those woods).

Acute trauma cases such as Tilly require careful coordination between different teams and disciplines and we are very proud of our teams of surgeons, anaesthetists, nurses and ICU staff who work well together often in times of exceptional pressure to deliver the best care and therefore outcomes for our patients.