A 10-year-old Staffordshire bull terrier was referred to Eastcott due to a left sided facial swelling, temporal muscle wastage and difficulty to open his mouth

In this case, the patient could not open the mouth because of an aggressive expansile process affecting the left tympanic bulla, which was filled by non-contrast-enhancing material. The orange arrowheads show the thinned and expanded walls of the affected tympanic bulla, whilst the pink arrowheads highlight the solid periosteal reaction at the level of the left temporal bone.

The expansion of the dorsal wall of the tympanic bulla, had a mass effect on the brain. A severe expansile process was also seen at the level of the left zygomatic process (cyan arrowheads), causing a reduction of the left temporomandibular joint intra-articular space.

A small tubular structure (red arrowheads), connected the described lesion, with a large and cavitary subcutaneous lesion, that represented the cause of the left sided soft tissue swelling. This lesion was fluid filled and showed a diffuse ring-contrast-enhancement. 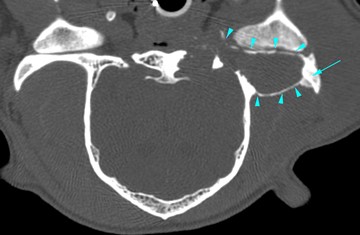 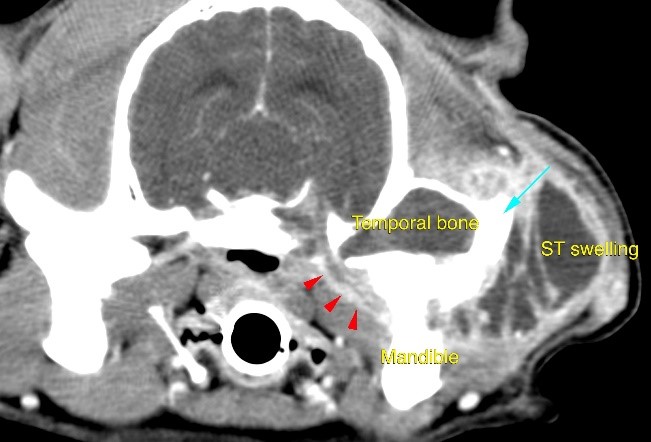 Scroll down for the diagnosis…

Images were highly suggestive of cholesteatoma, a congenital or acquired epidermoid cyst which arise within the tympanic bulla.

The primary use of CT imaging is of the head of dogs and cats with neurological or nasal diseases. Technologic advances in hardware and software, opened up new possibilities, including abdominal and thoracic imaging, and high definition scanning of lungs and bones.

CT is now widely used in veterinary practice and has become an essential asset to veterinarians in the pursuit of many diagnoses. Long body parts can be scanned within a couple of seconds in amazing detail and accurate contrast resolution.

Thanks to the possibility of reformatting the images in any plane, or as three-dimensional projections, a better representation of the structural anatomic relationships can be achieved.

CT’s diagnostic power is comparable with, or superior to, other imaging modalities such as ultrasound and MRI for many disorders and has immense potential as a rapid and efficient diagnostic tool for a wide range of indications.