Lenny, a 10-month-old Working Cocker Spaniel, was sadly a little too inquisitive for his own good

Whilst exploring on a walk one day this young puppy startled a horse and received short shrift, in the form of a glancing blow to the jaw. 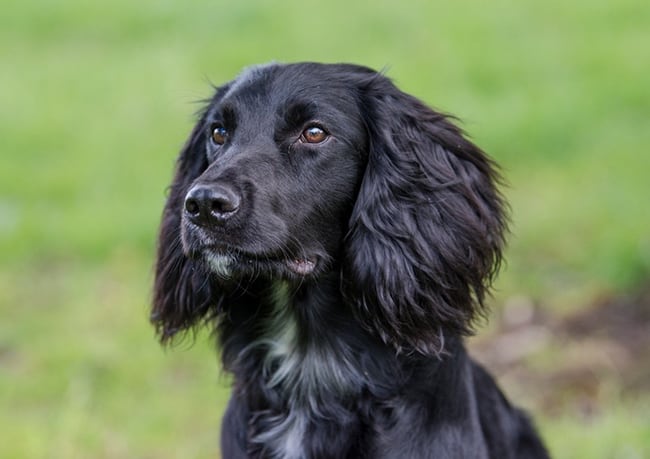 It became clear that significant damage had been done, certainly Lenny’s owners found Lenny’s distress equally upsetting and he was whisked to his local vet for emergency care. After pain management, shock therapy and an overnight period of stabilization, Lenny had some radiographs taken that showed that he had sustained a significant fracture of his mandible. Despite this, Lenny continued eating with gusto after his trauma. Lenny’s appetite was perhaps less to do with “no sense, no feeling” and more due to the minimal displacement and inherent stability of the fractures. Lenny was quickly transferred to Eastcott Veterinary Referrals for further evaluation.

A CT allowed an exact appreciation of the dimensions of the fractures and their relationship to Lenny’s tooth roots, critical to preventing iatrogenic damage during repair of mandibular fractures.  Lenny was noted to have 2 fractures, a rostral unfavourable fracture and a caudal, lingually displaced fragment. The displacement of the caudal fragment was resulting in subluxation of the left temporomandibular joint.

A transmyohyoid intubation was performed, allowing for Lenny’s mouth to be closed intraoperatively, and temporary elastic maxillomandibular fixation placed. These procedures allow us to control the occlusion during fracture manipulation and reduction. Like all fractures, accurate anatomical reconstruction for mandibular fractures is desirable but it is imperative for a functional, stable occlusion to be the most basic goal of repair.

The fractures were stabilised using titanium mini-plates, achieving rigid internal fixation. The caudal fragment was less stable and so orthogonal plates were utilised to maximise stress neutralisation and to aid in initial reduction.

Post-operative assessment indicated excellent reduction of the fragments and resolution of the temporomandibular subluxation. Lenny recovered well from the surgery, ate within four hours of treatment and was discharged 36 hours after surgery, hopefully to avoid his horse friends for a little while.