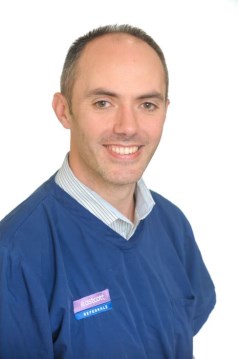 Tim qualified from Cambridge University in 2001 and after 18 months in mixed practice joined Eastcott in 2003. Tim gained the RCVS Certificate in Small Animal Surgery in 2006 and then completed an "alternate route residency” towards the RCVS diploma in small animal, soft tissue surgery (DSAS-ST). Tim passed the diploma exams in 2012 becoming the first vet from general practice to gain this qualification which is widely regarded as the highest level of specialist qualification in this field. Tim became an RCVS recognised specialist in 2013 and now works purely as a referral soft tissue surgeon and is particularly interested in minimally invasive surgery, advanced wound reconstruction, ENT and oncological surgeries. Tim is a committee member of the Association for Veterinary Soft Tissue Surgery (AVSTS) and is currently heavily involved with post-graduate surgical training in the UK. Tim is currently chief examiner for the RCVS CertAVP, is an examiner for the RCVS Diploma in Small Animal Surgery (DSAS) and is also an examiner and an academic board member for the European School of Veterinary Postgraduate Studies (ESVPS).

Charlesworth T (2015) The use of skin flaps in small animal reconstructive surgery. Companion 20(12)

« view other Team members in this category