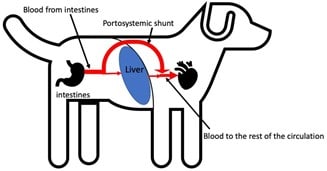 This extra blood vessel means the toxins which the liver would have filtered out circulate around the body. These can cause some of the signs most commonly associated with PSS such as abnormal demeanour, behaviour or vacant episodes and even fits in severe cases. Occasionally urinary signs, such as increased urination, increased thirst, or even bladder stones are also seen. Cats are more likely to show gastrointestinal signs such as hypersalivation, vomiting or diarrhoea than dogs, although both can have these issues. These signs may be worse after eating as blood toxin levels rise.

As the liver has fewer nutrients delivered to it because they bypass the liver in the PSS, the liver’s role in the body is subsequently compromised. Signs of this for example include stunted growth, a poor coat or a failure to gain weight properly.

There are usually changes on routine blood tests that are suggestive of a PSS, however these can be very subtle and, in some cases, not present. Often, if a vet is suspicious, a more specific blood test to try and test liver function is performed. Ultimately, some way of imaging the abnormal vessel is required to make a diagnosis. This may be an ultrasound scan or increasingly a CT scan for example.

Treatment is split into medical and/or surgical. Often animals are treated medically for a period before surgical management to get them as fit as possible prior to surgery. Generally surgical management is recommended, as assuming the patient recovers from surgery as expected, we know that the vast majority go onto to lead a normal length life and although no animal with a shunt ever has completely normal behaviour the important aspect is that the quality of their life is normal following surgery. Animals are often very much improved with medical management alone, but their improvement is not as good as following surgery and their life expectancy is not as long.

Surgery aims to close the abnormal blood vessel.  One of the factors that will often determine the surgical method used is how well developed the liver is. There is no way to predict this pre-operatively. When the PSS is closed and all the extra blood that had been diverted around the liver, is then forced through the liver, in some instances the liver is insufficiently developed to cope with all the extra blood – causing the pressure specifically within the blood vessels going to the liver to rise. This can be a very serious complication of surgery but thankfully one that can be avoided by making specific intraoperative observations and measurements. If the liver is sufficiently developed to allow the PSS to be immediately and permanently closed the situation is more straight forward. If it is not, then a method of gradually closing the PSS is used which slowly increases blood to the liver allowing it time to develop. There are many ways of achieving this, a common method is to place a band of cellophane around the PSS which causes gradual and progressive closure of the shunt, but it is best discussed with your specialist surgeon prior to surgery.